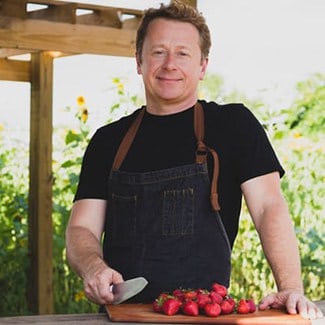 Chef/Restaurateur Kristian Niemi is a pioneer in Columbia’s burgeoning food and beverage industry, having opened some of South Carolina’s most popular restaurants including Mr. Friendly’s New Southern Café, Gervais + Vine, Solstice Kitchen + Wine Bar, Rosso Trattoria, Bourbon, and most recently, Black Rooster. In 2013, he founded The Great American Whiskey Fair, which has quickly become the largest whiskey show in the nation, with over 500 whiskeys presented by over 125 distilleries. He is also a partner in the Farm to Table Event Company, which specializes in dinners and events focused on local, sustainable food sources. Niemi’s restaurants have been featured in Bon Appetit, Southern Living, Wine Spectator, Frommers, USA Today, Food Network, and Travel Channel UK. He was a featured chef for WLTX for seven years, as well as two seasons of Carolina Cooking, which was aired in 140 countries around the world. He is a regular guest on “Making It Grow” on SCETV, and was featured on Chef John Folse’s “Preserving Traditions” series on Louisiana ETV. Kristian would rather be cooking over an open fire than pretty much anything else and is a Kudu Braai Master.