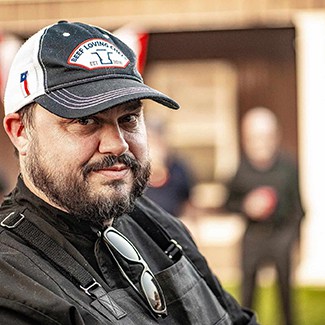 For Matthew, the journey to becoming a professional pitmaster and chef is rooted in a passion for food instilled in him by his Mother’s cooking from scratch and his exposure to many regional styles in his travels as a child in a military family. Matt’s love of barbeque developed early, as it was a favorite choice among siblings in his large family, and they sampled local BBQ across the country in their numerous moves and journeys.

Over many years, Matt has developed his own style of smoked meat while studying and learning from the traditions of age-old wood-smoked BBQ. He eventually started a home-based catering company. This venture quickly took off, and with the support of his family and friends, Matt chose to follow his passion and leave his successful corporate career to make a switch into the food industry full time. Matthew has focused his culinary career on learning from those he respects, and who see the potential of specially crafted wood-smoked provisions. He values and respects the relationships between the earth and the animals, farmers, and chefs. Aligned with those values, Matt worked for Sam Jones of North Carolina, known for his expertise in whole hogs smoked over hickory. To further his craft and progress towards his goal of more artistic and craft-style smoked proteins, Matt is currently working under Chef Joy Crump of Bravo’s Top Chef Boston, who along with partner Beth Black, have three restaurants with a southern farm to table, seasonal, focus. Chef Deaton’s wood-smoked provisions are threaded through all three restaurant’s menus.