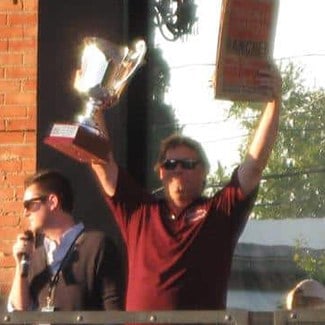 I’ve been involved in barbecue one way or the other for most of my life, but I really got the bug back in the early 1990s. Around that time I had asked my wife Cindy to marry me – but I’d also discovered the whole barbecue competition thing. As luck may have it, I’d also found an Oklahoma Joe cooker that costs about the same as an engagement ring, so being the wonderful woman she is, she told me to buy the cooker and let’s go have some fun. Full disclosure – I bought her engagement ring shortly afterwards!

Our first competition was the Augusta Lock and Ham Jam around 1990. We had no idea what we were doing, but we took 4th rib out of about 2 dozen teams, at which time the hook was fully set. We spent the ensuing years traveling the southeastern US from Washington, DC down to Florida, west to Memphis, Tennessee and various points in Alabama and Mississippi. During that time we won countless first place awards in various barbecue categories, took dozens of Grand Champion trophies home, been named the South Carolina State Champions 3 times, recognized as a Top Ten Team in the country for the MIM/MBN barbecue association 5 years in a row, and became the proud parents of Rufus D. Hogg, a life size replica of a Hampshire pig who travelled with us for 15 or more years. Sadly, Rufus was stolen in Milledgeville, GA several years ago, and we’re still searching for him to this day!