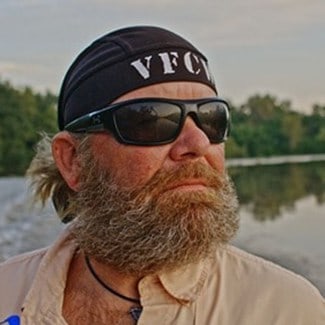 SFC (RET) John “Truck” Carlson is a native Georgian and a Veteran of 30 years in the military. He spent 8 years in the Marine Corp (Both Active and Reserves) and 22 years in the Army. He was a Stinger Missile Operator in the Corps, and a Behavioral Health Specialist in the Army. He served in Desert Storm/Shield, Operation Enduring Freedom and Operation Iraqi Freedom (X2). Truck has been stationed all over the world and retired out of Fort Gordon Georgia where he served as the NCOIC of the Department of Behavioral Health for Fort Gordon, Miami and Puerto Rico.

Truck currently is the Program Coordinator for Veterans For Clean Water for the Savannah Riverkeeper. His program conducts weekly water sampling of the Savannah River at 18 different points from May until the end of September. Veteran volunteers from the CSRA conduct water sampling both in kayaks as well as collecting samples from the water’s edge at various points. The first restoration project is turning Butler Creek back into a recreational waterway. This will require removing debris from within the creek that has stopped the ability for fish to navigate upstream, with the goal being to return the creek back into a fishable waterway. Truck has spoken at numerous conservation and Veteran centric events such as: 100 Miles, Forces United, Sierra Club, Knights of Columbus, and numerous civic organizations across Georgia. Recently, Truck was selected to speak at the 2019 TEDx Savannah event. His talk centered around how volunteering can enrich the lives of Veterans.